When looking at the history of mankind we may not forget that the human mind has always looked for ways to tell what happened in the past. It was not always necessary to give exactly every detail. Often myths, legends, saga, tall tale or folk tales brought ideas of past periods and gave an impression how people looked at things.

About certain events in history man did not know so much or thought those stories of the Bible where just imaginations until otherwise proven. About certain figures we did not know much more than what is written in the Bible. For example, the well-known Israelite King David. Until recently, the sole basis for knowledge of his existence was that Book of books, the Bible. Although mainline historians accept King David as an authentic figure, some sceptics still try to dismiss him as a legend invented by Jewish propagandists.
What do the facts show?

In 1993 an inscription referring to the “House of David” was found in the ruins of the ancient Israelite city of Dan. The inscription was part of a shattered monument from the ninth century B.C.E., commemorating a victory over the Israelites by their enemy. Suddenly, there was an ancient reference to David outside of the pages of the Bible! Was this significant? Regarding this finding, Israel Finkelstein, of Tel Aviv University, observed:

“Biblical nihilism collapsed overnight with the discovery of the David inscription.”

Now Tel Dan is considered as one of the most important sites in the ancient Near East, in general, and for Biblical archaeology, in particular. Situated at the base of snow-capped Mount Hermon on the headwaters of the Jordan, Dan has been an important settlement from the Neolithic period (ca. 5,000 B.C.E.) through the early modern period.

Archaeological highlights include massive Early Bronze Age fortifications (ca. 2900–2200), the earliest preserved mudbrick arched gate in the world (ca. 1900–1500 B.C.E.), a spectacular treasure-filled Mycenaean tomb from the Late Bronze Age (ca. 1500–1200 B.C.E.), an early Iron Age I agrarian settlement that some associate with the Israelites (ca. 1200–1000 B.C.E.), major fortifications and what is apparently an Israelite temple — perhaps where Jeroboam’s golden calf once stood (1 Kings 12) — from the Iron Age II (ca. 1000–700 B.C.E.), and various figurines, statues and inscriptions from the Persian, Hellenistic and Roman periods.

The fragmentary Tel Dan stela, containing the Tel Dan inscription (or “House of David” inscription) provided the first historical evidence of King David from the Bible.

On a stela erected by an Aramean king in the mid-eighth century B.C. E. his claim to have defeated the “king of Israel” and the “king of the House of David” gives us reason enough to expect King David to have lived and even being defeated. 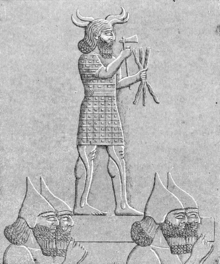 On the stone is also made reference to an other god than the one from the Israelites, as if the Aramean king under the divine guidance of the god Hadad, vanquished several thousand Israelite and Judahite horsemen and charioteers before personally dispatching both of his royal opponents.

Problem when we do find only fragments of stones is that the artefacts not always do give enough names and information. As such archaeologist always have to continue to embroider on what they could find.

As for all investigations and finding in each period of uncovering the artefacts the scientist could only work with the material then available. As new scientific methods, including infrared soil analysis, GPR and isotope analysis of faunal remains, in addition to gathering a new set of samples for radiocarbon dating came available often the previous ideas had to be changed. Though those changings never did change something of the Biblical stories. Just the opposite often the bible proved to be telling the truth.

As always the world has its sceptics and deniers, who love to go against certain ideas and stories. and when god is involved the adversary is even bigger than any other subject.

The “House of David” inscription had its skeptics, however, especially the so-called Biblical minimalists, who attempted to dismiss the “House of David” reading as implausible and even sensationalistic. In a famous BAR article, Philip Davies argued that the Hebrew term bytdwd referred to a specific place (akin to bytlhm for Bethlehem) rather than the ancestral dynasty of David. Such skepticism aside, however, most Biblical scholars and archaeologists readily accepted that the Tel Dan stela had supplied the first concrete proof of a historical King David from the Bible, making it one of the top Biblical archaeology discoveries reported in BAR. {The Tel Dan Inscription: The First Historical Evidence of King David from the Bible}

Tel Dan, a city mentioned in the Hebrew Bible, described as the northernmost city of the Kingdom of Israel and belonging to the tribe of Dan. – Remains of the Iron Age (Israelite) Gate on the City’s South Wall

Bible or Archaeology telling the truth

Visit the BAS Library for more on the Tel Dan inscription:

You may find articles on David at