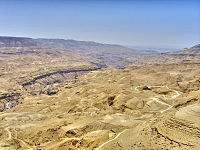 Wadi Mujib, known in the Hebrew Bible as River Arnon

The ancient Semitic-speaking nation occupyed the east of the Jordan River, between the torrent valleys of Arnon and Jabbok, in present-day Jordan. The slopes of the mountainous land are very sparsely vegetated, with a steppe-type vegetation on plateaus. Groundwater seepage does occur in places along the Dead Sea shore, for example at the hot springs of Zara, which support a luxuriant thicket of Acacia, Tamarix, Phoenix and Nerium, and a small marsh. The less severe slopes of the reserve are used by pastoralists for the grazing of sheep and goats.

Their principal city was Rabbath Ammon, in Palestine (ancient Greek Philadelphia). The city is built on rolling hills at the eastern boundary of the ʿAjlūn Mountains, on the small, partly perennial Wadi ʿAmmān and its tributaries. Ammon, the “royal city” taken by King David’s Jewish military commander general Joab (II Samuel 12:26) was probably the acropolis atop the plateau. King David sent Uriah the Hittite to his death in battle before the walls of the city so that he might marry his wife, Bathsheba (II Samuel 11); the incident is also a part of Muslim folklore. The population of the Ammonite cities was much reduced under King David. David’s son Solomon (flourished 10th century bce), who built the first Temple of Jerusalem and who is revered in Judaism and Christianity for his wisdom and in Islam as a prophet, had Ammonite wives in his harem, one of whom became the mother of Rehoboam, Solomon’s successor as king of Judah, who proved to be unfit for the task of reigning. Rehoboam allowed the situation to remain that of a stalemate, thus inaugurating the period of the divided monarchy that lasted in Israel in the north from 922–721 bce and in Judah in the south until 586 bce.

The “sons of Ammon” were in perennial, though sporadic, conflict with the Israelites. After a long period of seminomadic existence, the Ammonites established a kingdom north of Moab in the 13th century bce. With difficulty, their fortress capital was captured by Israel’s King David. An Ammonite woman, one of many foreigners taken into Israel’s King Solomon’s harem, was responsible for inducing the king to worship the Ammonite god Malcom.

Solomon is perhaps one of the most overrated figures in the Old Testament, in spite of his achievements in wisdom, construction, and commerce; he is recorded as having 1,000 wives and concubines—some of them merely guarantees of commercial treaties, to be sure—and as building a fleet of ships for a nearly landlocked Israel.
His aim was the control of a great overland trading route. To consolidate his interests in the province, he planted Israelite colonies to look after military, administrative, and commercial matters. Such colonies, often including cities in which chariots and provisions were kept, were in the long tradition of combining mercantile and military personnel to take care of their sovereign’s trading interests far from home. Megiddo, a town located at the pass through the Carmel range connecting the coastal plain with the Plain of Esdraelon, is the best-preserved example of one of the cities that Solomon is said to have established.

Amman declined in later centuries. In the 3rd century bce it was conquered by Egypt’s King Ptolemy II Philadelphus (reigned 285–246 bce), and he renamed it Philadelphia after himself; the name was retained through Byzantine and Roman times. Philadelphia was a city of the Decapolis (Greek: “Ten Cities”), a Hellenistic league of the 1st century bce–2nd century ce. In ce 106 it was included in the Roman province of Arabia and rebuilt by the Romans; some fine ruins of their rule in this period have survived. With the coming of Christianity, it became a bishopric among the sees of Palestina Tertia subject to Bostra.

At the rise of Islam, Amman was taken by the Arab general Yazīd ibn Abī Sufyān in ce 635; by about 1300 it had entirely disappeared, from causes unknown to historians. In 1878 the Ottoman Turks resettled the site with Circassian refugees from Russia; it remained a small village until after World War I.

Nabataean depiction of the goddess Atargatis dating from c. AD 100. The eagle on her head is believed to be a symbol of Qos.

Over the past 50 years excavations at Amman, Jordan have unearthed monumental architectural remains from 1000–580 bce, including a larger-than-life image of an Ammonite king—the first statue of this size ever discovered east or west of the Jordan.

Recent archaeological discoveries from Moab have added important religious evidence for the Iron Age and there may even have been a possible connection — if not an original equation — the Idumean rival of the Israelite god Yahweh, Edomite god Qos, the son of Qos (Ben Qos) parallelling the Hebrew ‘Beniyahu’ (son of Yahweh). – The name occurs only once in the Old Testament (if we exclude a possible allusion in an otherwise corrupted text in the Book of Proverbs) in the Book of Ezra as an element in a personal name, Barqos (‘Qōs gleamed forth’), referring to the ‘father’ of a family or clan of perhaps Edomite/Idumaean nĕtînîm or temple helpers returning from the Babylonian exile. {With a minimal adjustment of emendation Vriezen elicited from the corrupt אלקום (Proverbs, 30:31) an allusion to “the god Qos”. (Dicou 1994, p.177, n.1).} {E. A. Knauf. (1999). Qos [in] Karel van der Toorn, Bob Becking, Pieter Willem van der Horst [eds.], Dictionary of Deities and Demons in the Bible, pp.674-677. Wm. B. Eerdmans Publishing: “This clan or family must havbe been of Edomite or Idumaean origin.” (p.677).}

One thought on “Ammonites, Moabites and Edomites”

Neutrality or silence vs Taking sides

Choose Happiness – make up your mind

”“Folks are usually about as happy as they make up their minds to be.” .”

Having faith in the ocean Humanity

””You must not lose faith in humanity. Humanity is an ocean; if a few drops of the ocean are dirty, the ocean does not become dirty.” ~ Mahatma Gandhi .”

Blossoming and healing the planet

””There is so much love in your heart that you could heal the entire planet. But just for now let us use this love to heal you. Feel a warmth beginning to glow in your heart center, a softness, a gentleness. Let this feeling begin to change the way you think and talk about yourself.”.” […]

”One of the things that the study of philosophy reveals is the profound relationship between the language that we use and our perception of what is real. We don’t have to look too deeply into philosophy before we begin to realize that our knowledge about anything is constructed in language and is always found in […]

Rose bushes their thorns or roses

” We can complain because rose bushes have thorns, or rejoice because thorn bushes have roses”> ~ Abraham Lincoln

To try to act a little kinder than is necessary

Natural sounds and a quiet path

”“Wind in the trees, thunder, flowing water, falling leaves, rain, animal voices, birdsong – we live amid a teeming polyphony of natural sounds. “Add to these the sounds of human activity, from soft footsteps to pneumatic drills, from muted conversation to pounding trains, from jetting fountains to jet planes.”

It’ s not me. It’s the monster

Globalization and neoliberalism. They’ve become the explanations du jour for the decimation of industries and the devastation of lives, for falling wages and slashed public spending. And there is, of course, truth to the claim. But capitalism was chewing up and spitting out its victims long before the market was globalised or liberalism became neo’d. […]