During the 30 excavation seasons conducted at the site of ancient Hazor, where in 2013 an Egyptian sphinx was discovered, it became clear that this was the largest and most important city-state in the Land of Israel in the second millennium BCE. At its floruit, Hazor spanned c. 200 acres, 10 times the size of Jerusalem in the days of King David and King Solomon. 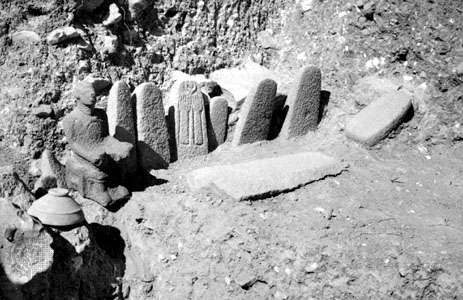 Standing stones and seated deity from the high place at Hazor, dating from the 13th century bc. – Israel Exploration Society/Hazor Expedition

The full urban development of the Middle Bronze Age seems to come only in the late 18th century BCE, which we can see in the Jordan Valley north of Lake Huleh. The first Middle Bronze Age occupation there, was confined to the area of the mound that marked the site of the Early Bronze Age town. To this town was added, probably in the second half of the 18th century, a vast new area, enlarging the site to about 182 acres. This area was built up with houses and temples and was defended by an entirely new type of fortification. Consisting of a great earth bank with a wall on the top. Defences of the same sort, an earth bank usually with a plaster facing, are found at many sites, such as Jericho, where it can be dated to the late 18th century BCE, Megiddo, Tel Bet Mirsham (Tell Beit Mirsim), and Tel Lakhish (Tell Dnweir), though at these sites the bank is for the most part backed against the earlier mound.

The capital of the Canaanites, 4 miles northeast of Zefat, spanned c. 200 acres, 10 times the size of Jerusalem in the days of King David and King Solomon. It was first investigated in 1928 and excavation has revealed the remains of extensive fortification of the time of Solomon.

The magnificent finds uncovered within the Ceremonial Palace of the Canaanite period point to extensive commercial, cultural and artistic ties with the centres of power in the region, from Babylon in the east, through the Hittite kingdom and Egypt, all the way to Cyprus and Greece in the west. Hazor’s days of grandeur came to an end with its fall into the hands of the Israelite tribes that settled the land. Sphinx statue fragment with hieroglyphic inscription between the front legs of the sphinx connecting the statue to the Egyptian king Menkaure (c. 2500 B.C.), one of the builders of the famed Giza pyramids. Photo courtesy of. Amnon Ben-Tor and Dr. Sharon Zuckerman.

Hazor is the place where no other sphinx belonging to Menkaure has been found anywhere in the world, including Egypt. Even more incredibly, this is the only piece of royal sphinx sculpture ever found in the Levant.  It was discovered at the entrance to the city palace in a 13th-century BCE destruction layer. The statue may have been brought to Hazor as plunder by the Hyksos, a dynasty of kings from Canaan who ruled Lower Egypt in the late 17th and early 16th centuries, or perhaps slightly later as a gift from a New Kingdom Egyptian ruler. Hazor, the once-powerful Canaanite city described in the Book of Joshua as “the head of all those kingdoms,” was destroyed in the 13th century.

Hazor “fell” in the Late Bronze Age, destroyed in a massive fire. According to Joshua 11:13,

“As for the cities that stood still in their strength, Israel burned none of them, save Hazor only. That did Joshua burn.”

Scholars have long argued over who was responsible for the destruction of Hazor. Using archaeological evidence, Ben-Tor argues tentatively that Joshua did conquer Hazor, but asks readers to

“bear in mind that this is still under debate.”

Tiglath-Pileser III: stela from the walls of his palace (British Museum, London).

Hazor was resettled in the days of the United Monarchy. Although no longer “the head of all those kingdoms,” Hazor was still an important site, as excavations from the Israelite period have revealed fortifications, public structures (including a massive water system) and residential buildings dating from the tenth century until the destruction of the city in 732 BCE by Assyrian King Tiglath-pileser III (2 Kings 15:29). The city’s destruction and the Assyrian deportation of the people of Hazor and of the Galilee marked the beginning of the end for the Kingdom of Israel in its entirety.

For those who want to know more about the Israelites and want to witness the reliability of the Biblical historiography first-hand at this historical place one can cast his eyes upon the structures attributed to the days of the monarchs of the Kingdom of Israel, from Solomon, through Ahab and Jeroboam II, until the days of Pekah son of Remaliah.

In Daniel 12:1 is spoken of a time that the archangel Michael, or the great prince who as a grand defender and guardian protects [L stands by] God’s people [10:13, 21], will stand up [arise (Jude 9; Revelation 12:7)]. All people should know that there will be a time of much trouble [distress], the worst time […]

In the reading of Matthew chapter 24 we may find that the writer separates the local judgment-coming prophecies regarding 70 CE from the global ultimate-coming prophecies of the Second Coming and the Final Judgment which is much further in the future. Matthew’s version of the Olivet Discourse is significantly different from Mark’s 13 chapter. It […]

In our previous post you could read how Jesus was seated on the Mount of Olives and talked to his disciples who had asked him to tell them when this destruction of the temple, about he talked earlier, would take place, and what would be the sign of his coming, and of the end (completion, […]

Matthew 24:29-35 – The Nazarene’s Commentary: The Answer Part Two – Sign 2: The Parousia. A Sign after the Great Oppression

Matthew 24:9-14 – The Nazarene’s Commentary: The Answer: Part Two – The Acts of the Apostles Foretold

“Many in the church have turned their back on serious study, and have embraced an anti-intellectualism which refuses to learn anything from scholarship at all lest it corrupt their pure faith. It is time to end this stand-off, and to re-establish a hermeneutic of trust (itself a sign of the gospel!) in place of the […]

Is reading the Bible necessary?

Many who call themselves Christian do like to follow Augustine, even more than Christ. they do agree with him that reading the Bible is no longer necessary once God had fully cultivated faith, hope, and love in us (On Christian Doctrine, 1.39). In other words, according to them, once we are mature in Christ, the […]

By lockdown hearing nature to revive, hearing more the sound of singing birds and seeing more animals going around free in nature.

Media to the glory of God!