Masada, Hebrew H̱orvot Meẕada (“Ruins of Masada”), ancient mountaintop fortress (‬ metsada, “fortress”) in southeastern Israel, site of the Jews’ last stand against the Romans after the fall of Jerusalem in 70 ce. 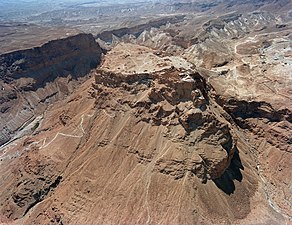 Aerial view showing Masada and the Snake Path from the northeast

Masada occupies the entire top of an isolated mesa near the southwest coast of the Dead Sea. The rhomboid-shaped mountain towers 1,424 feet (434 metres) above the level of the Dead Sea, 20 km (12 mi) east of Arad. It has a summit area of about 18 acres (7 hectares).

It was Herod the Great who was responsible for the construction of 2 palaces for himself as a refuge for himself in the event of a revolt, and fortress including storehouses, barracks, an armory, and cisterns that were refilled by rainwater. Three narrow, winding paths led from below up to fortified gates fortified Masada between 37 and 31 BCE.

Millions of visitors travel to the renowned Israeli national park of the legendary Herodian pleasure-palace at Masada every year. Yet there are many aspects of Masada that are still unknown even to the most enthusiastic scholar — and more as yet undiscovered.

The legendary Herodian pleasure-palace sits in one of the most dramatic settings in the world. Its history includes the even more dramatic Roman siege that ended with the occupying Zealots, Jewish rebels, committing mass suicide, rather than live out their lives as Roman slaves. The year of the siege of Masada may have been 73 or 74 CE. According to Kenneth Atkinson, no “archaeological evidence that Masada’s defenders committed mass suicide” exists. 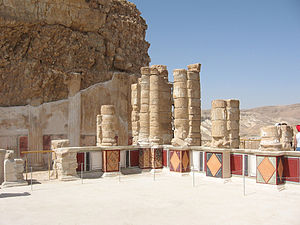 While the moving story of rebellion and brave resistance by a small native group against the mighty Roman Empire is naturally most appealing to modern ears, there are equally intriguing aspects that are often overlooked from the other side of the story — the Roman point of view.

The 2.5-mile, 5-foot wide, 10-foot high circumvallation wall that the Romans built around the fortress.

Digging deeper into the true story of Masada

But there is so much beyond these glimpses into the distant past. From Biblical Archaeology Review, we learn that the wall, while a fairly common tactic in Roman siege warfare, was unusual in the difficulty of the terrain that the Romans managed to cross with it.

We learn that the Roman operation probably included some 7,000 to 10,000 men, some of them ancillary troops from other nations within the Empire — all arrayed against a mere 960 Jews holed up inside the fortress.

We learn that the Romans went to the trouble and expense of importing wood to the encampment for their building projects, and had multiple camps, including two that spread over five acres each.

We discover the bitterly ironic fact that the troops staring up at Masada for months had been forged and trained in the architecture of warfare by their earlier experiences in putting down the Zealots’ fellow rebels over the previous three years.

And above all, we learn from studying the remains of the Roman encampments and siege structures that such relentless pursuit of a monolithic building scheme — even at the expense of strict military necessity — suggests that the Romans were consciously adopting a form of psychological warfare.

The Jewish rebels inside their fortress high above the Roman encampment would have known that they were, finally, totally isolated, with no hope of relief or escape. Even more, other restless subject nations would readily understand the message that they could never resist Roman might.
Yet this sobering reflection on what the Jews of the first century faced is still only a fraction of what we’ve learned about Masada.

Pleasure palace and most massive attack ramp in the ancient world

We know how Herod initially managed to create a pleasure palace, complete with baths and gardens, in the middle of the desert.

We know how the Romans managed to build what appears to be the most massive attack ramp in the ancient world in a matter of weeks, instead of months.

We know that there are still unexplored caves within the site, some of which are still to be explored in coming months.

Matthew 25:14-30 – The Nazarene’s Commentary: Keep Busy until the Parousia

Matthew 25:14-30 – Keep Busy until the Parousia MT25:14 “For this may be compared to a Master about to go on a long journey,[1] who called his slaves and handed over to them his possessions. MT25:15 To one slave he gave five talents,[2] to another two, and to yet another, one talent – all according […]

Matthew 25:13 – The Nazarene’s Commentary: Keep on the Watch

Matthew 25:1-12 – The Nazarene’s Commentary: Judgment by the King and Ten Virgins

CHAPTER TWENTY-FIVE: THE ARRIVAL AND THE JUDGMENT [“Parousia-Judgment”] (Key word: Judgment) Matthew 25:1-12 – Judgment by the King and Ten Virgins MT25:1 “At that time[1] the Realm of Heaven will become like[2] ten virgins[3] who took their lamps[4] to go to the meeting of the bridegroom.[5] MT25:2 But five of them were foolish and five […]

Jesus Christ had only a very short time of public life. In those three years of walking and preaching around, he admonished the people to follow the good doctrine, not the evil examples, of the Scribes and Pharisees. They really got annoyed by that rabbi which seemed to know more than them. In Matthew 23 […]

Here at Last! from “The Seventh Day” Christadelphian Music

In our services, we do love to have some music also. Since we can not have real-life services in our own ecclesia we offer net meetings for our gatherings. We now also take the opportunity to share with many more people all over the world who belong to that worldwide community of brothers and sisters […]

For many, the Bible seems a very old book with such an old language that it can not be pleasant to read. Lots of people think it is too difficult to grasp. Can it be that the present generation have a too limited view of that Old Book of books? Perhaps lots of people have […]