From the time of Alexander the Great in the fourth century B.C.E., Jews lived in a world in which Greek culture carried a certain prestige and offered a route to political influence. 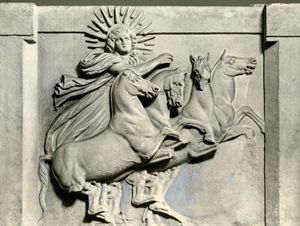 Helios in his chariot, relief sculpture, excavated at Troy, 1872; in the State Museums of Berlin

Hellenistic and Roman-era art from the Biblical world shines a spotlight on Judean identity and cultural influences during a formative period in the region’s history. From Hercules as trendy Israeli bathhouse décor to mosaics celebrating Helios, the sun god, in ancient synagogues, Greek culture permeated Judea.

It is even thought by some scholars that Jews in ancient times considered Helios a minor deity to whom they could offer prayers!

A connection between the Jewish worship of angels and astrology is attested by many early Christian writers. According to the Preachings of Peter, referred to by Clement of Alexandria, the Jews, “thinking that they only know God, do not know him, adoring as they do angels and archangels, the months and the moon.”

Origen writes in Contra Celsius that

“what is astonishing about the Jews is that they adore the sky and the angels that inhabit it.”

Cultures collide, and then combine

Unsurprisingly, while there is ample evidence of the influence of Greek culture on Jewish culture, there was also resistance, at least for a while. Human nature explains the desire of the Jewish elite to seek power and status by adopting elements of the dominant culture. And piety explains the blowback from some Jews, such as Judas Maccabee, who, of course, revolted against Hellenized Jewish rulers and purified their “defiled” Temple in an act that is still celebrated in the Jewish festival of Hanukkah.

Yet as Professor Martin Goodman notes,

“Outside of Jerusalem and Judea, Jews rarely treated Greek culture as a threat to their Judaism.”

The lovely zodiac mosaic floors of Palestinian synagogues of the fourth to sixth centuries C.E., so similar to those at pagan sites, attest to that.

This artistic expression tells us that Jews had simply adopted those Hellenistic features that complemented their own worship, including Hebrew labels on the zodiac signs, and — according to some scholars — used images of the Greek sun god Helios to represent Yahweh, who has no form and cannot be represented in art, but is described in Jewish texts from Biblical times as fiery like the sun.

Because the centuries immediately surrounding Jesus’ birth were such a formative period in Judean history, studying the Hellenization of Jewish and early Christian culture during this period is crucial in understanding Biblical history.

And all of it is revealed in the art and architecture examined in a very special collection of articles from the Biblical Archaeology Society, Ancient Art of the Biblical World.

in Ancient Art of the Biblical World, the editors of Biblical Archaeology Review have curated for you a highly focused look at the insights this art reveals.

You’ll want to read every one of the articles included in this collection:

And when you’ve finished reading all of these articles, you can turn to the rest of the Biblical Archaeology Society’s extraordinary 45-year-old library. Indeed, Ancient Art of the Biblical World is just one of 52 Special Collections designed to allow deeper study into specific topics and includes just a fraction of the incredible insights to be found in the BAS Library.

The BAS Library includes online access to more than 7,000 articles by world-renowned experts and 22,000 gorgeous color photos from…