As Bible scholars, historians and archaeologists we would always love to find the most hidden places and love to come to know more about what happened in the past.

We are fully aware that archaeology doesn’t provide 100% certainty on what we are looking for or on what we find. With our hands we are also tied to our limitations by the present material and knowledge at the time of discovery.

From Scriptures we do know that Ziklag is the name used for a city that was located in the Negev region in the south of the Biblical kingdom of Judah. Ziklag is mentioned multiple times in the Bible in relation to David (in 1 Samuel and 2 Samuel). In the Bible book 1 Samuel 30: 1-31 David and his 600 men came to Ziklag on the third day, that the Amalekites had invaded the south, the Negev, and had smitten Ziklag by burning it down. David was not only upset that his wives had been taken, but came to face the anger of his own men who blamed him and were talking of stoning him. According to the Biblical narrative, Achish, King of Gat, allowed David to find refuge in Ziklag while fleeing King Saul and from there David also departed to be anointed King in Hebron. According to scripture, Ziklag was also the scene of a dramatic event, in which the Amalekites, desert nomads, as relentless enemies of Israel, raided and burned the town taking women and children captive.

Already from 2015 a team under Prof. Yosef Garfinkel, Head of the Institute of Archaeology at the Hebrew University in Jerusalem, Saar Ganor of the Israel Antiquities Authority and Dr. Kyle Keimer and Dr. Gil Davis of Macquarie University in Sydney, Australia had put all their energy in an excavation, not specifically looking for Zikla, which was funded by Joey Silver of Jerusalem, Aron Levy of New Jersey, and the Roth Family and Isaac Wakil both of Sydney. They knew from surveys that the site had an Early Iron Age level, which fit their research interest. The excavation has been ongoing for seven seasons with large areas being exposed – approximately 1,000 sq.m., and Philistine finds unexpected producing new research questions and leading to this new identification for Ziklag.

View to the east from the summit of Khirbet a-Ra’i, recently proposed as Ziklag. Across the rolling foothills one sees the mountains of Judea in the distance. (Photo by Luke Chandler)

On July the 8th at Khirbet al-Ra’i a press conference was held that announced the identification of Khirbet al-Ra’i in the Judaean foothills – between Kiryat Gat and Lachis, as Ziklag.

The name Ziklag is unusual in the lexicon of names in the Land of Israel, since it is not local Canaanite-Semitic. It is a Philistine name, given to the town by an alien population of immigrants from the Aegean. Twelve different suggestions to identify Ziklag have been put forward, such as Tel Halif near Kibbutz Lahav, Tel Sera in the Western Negev, Tel Sheva, and others. However, according to the researchers, none of these sites produced continuous settlement which included both a Philistine settlement and a settlement from the era of King David. At Khirbet a-Ra‘i, however, features from both these populations have been found.

Evidence of a settlement from the Philistine era has been found there, from the 12-11th centuries BCE. Spacious, massive stone structures have been uncovered containing finds typical of the Philistine civilization. Additional finds are foundation deposits, including bowls and an oil lamp – offerings laid beneath the floors of the buildings out of a belief that these would bring good fortune in the construction. Stone and metal tools were also found. Similar finds from this era were discovered in the past in excavations in Ashdod, Ashkelon, Ekron and Gath — the cities of the Lords of the Philistines. 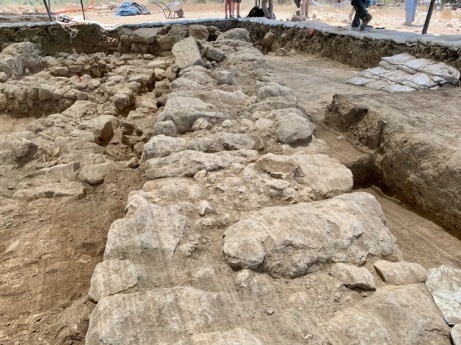 A massive Philistine wall foundation near the summit of Khirbet a-Ra’i. Archaeologists at this site recently proposed the site could be biblical Ziklag. (Photo by Luke Chandler)

Above the remains of the Philistine settlement was a rural settlement from the time of King David, from the early 10th century BCE. This settlement came to an end in an intense fire that destroyed the buildings. Nearly one hundred complete pottery vessels were found in the various rooms. These vessels are identical to those found in the contemporary fortified Judaean city of Khirbet Qeiyafa—identified as biblical Sha‘arayim — in the Judaean foothills. Carbon 14 tests date the site at Khirbet a-Ra‘i to the time of King David. 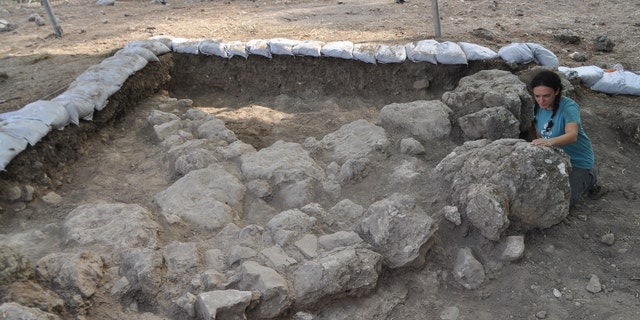 The great range of complete vessels is testimony to the interesting everyday life during the reign of King David. Large quantities of storage jars were found during the excavation- medium and large-which were used for storing oil and wine. Jugs and bowls were also found decorated in the style known as “red slipped and hand burnished,” typical to the period of King David.

Following a regional archaeological study in the Judaean foothills managed by Professors Garfinkel and Ganor, a picture of the region’s settlement in the early Monarchic era is emerging: the two sites – Ziklag and Sha‘arayim – are situated on the western frontier of the kingdom. They are both perched atop prominent hills, overlooking main routes passing between the Land of the Philistines and Judea: Khirbet Qeiyafa in the Elah Valley sits opposite Philistine Gath, and Khirbet a-Ra‘i, sits opposite Ashkelon. This geographic description is echoed in King David’s Lament, in which he mourns the death of King Saul and Jonathan in their battle against the Philistines:

“Tell it not in Gath, publish it not in the streets of Ashkelon.”

Some scholars have quickly criticized new claims before having to backtrack or modify their criticism as more information comes forth. At this point Luke Chandler, a seasoned Bible teacher and tour leader with an M.A. in Ancient & Classical History and nine seasons of archaeological experience at biblical sites in Israel, is comfortable seeing this as an interesting proposal that is already producing discussion. The excavators anticipate critique and look forward to addressing the kinds of questions that have already arisen.

Originally posted on THE LADY:
“Love is indeed blind”, the immortal immemorial words, ?Laid it’s crown, through the Avon’s bard of bards. ?Yet failed the crowd to read the deft insights,  Broke, a blind rebellion from the ages of might. A vibrant petal flower unbound, yearns not the amorous eyes, Nor nectars the covet of…

Originally posted on Poems by Israela:
Only time can pry you open, rain in April, skirt-wearing weather. Standing one-stalked with pale legs, the audacity to be yellow in March. Each year, new bulbs rise through blades of grass. In May, we will wilt— what makes spring is the moment of intersection between budding and dying,…