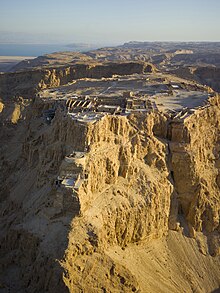 Masada (Hebrew: מצדה‎ metsada, “fortress” or ancient fortification in the Southern District of Israel situated on top of an isolated rock plateau, akin to a mesa.

Masada is a stronghold (which is a translation of the Hebrew) or rock fortress on an isolated high hill surrounded by precipitous cliffs and therefore nearly impregnable, situated at the E Judean desert close to the Dead Sea, some 16.5 km (10 mi.) S of Engedi, on the western shore of the Dead Sea, across from the Lisan Peninsula.

It is along the famous Afro-Syrian geological break, and stands as a rocky mountain, separated from the cliff to form a natural fortress. The plateau on top of this unique mountain measures ca. 800 m (N–S) by ca. 300 m (E–W). The two main, and practically the sole, sources to study Masada are Josephus and the archaeological record.

Scholars generally agree that it was the Hasmonean high priest Alexander Janneus (103–76 B.C.E.) who originally constructed the fortress, which consisted of four small palaces. In 40 B.C.E., under siege by Antigonus and the Parthians, Herod’s family remained at Masada while Herod fled to Rome. His family nearly died from lack of water, but a sudden summer storm saved their lives (Josephus Ant. 14.390–91). Herod rebuilt the fortress, adding eight cisterns, storehouses, a palace-villa with frescoes, three terraces, and a casement wall ca. 1280 m. (1400 yds.) long with 110 rooms inside its walls and towers.

The legendary Herodian pleasure-palace sits in one of the most dramatic settings in the world. Its history includes the even more dramatic Roman siege by Flavius Silva and the Tenth legion until 73/4 C.E., several years after the destruction of the temple in Jerusalem, that ended with the occupying Zealots, Jewish rebels, committing mass suicide, rather than live out their lives as Roman slaves.

While the moving story of rebellion and brave resistance by a small native group against the mighty Roman Empire is naturally most appealing to modern ears, there are equally intriguing aspects that are often overlooked from the other side of the story — the Roman point of view.

Excavations by Yigael Yadin in 1963–64 yielded many remains from the Herodian period: inscriptions, ostraca, “freedom” coins from the First Jewish Revolt, and a mikveh (ritual bath). Also discovered were fragments of biblical and nonbiblical manuscripts similar to those found in the caves near Qumran: Leviticus, Deuteronomy, Ezekiel, a scroll of Pss. 81-85, Ps. 150, the Songs of the Sabbath Sacrifice, and Hebrew original manuscripts of Sirach and Jubilees.

The present-day archaeologists discovered through archaeology:

The 2.5-mile, 5-foot wide, 10-foot high circumvallation wall that the Romans built around the fortress.

The 15 towers that lined the eastern and northern stretches of the circumvallation wall.

The great assault ramp that the Romans threw up on the western flank of the mountain, the most conspicuous surviving evidence of the siege.

From Biblical Archaeology Review, we learn that the wall, while a fairly common tactic in Roman siege warfare, was unusual in the difficulty of the terrain that the Romans managed to cross with it.

We learn that the Roman operation probably included some 7,000 to 10,000 men, some of them ancillary troops from other nations within the Empire — all arrayed against a mere 960 Jews holed up inside the fortress. The Romans went to the trouble and expense of importing wood to the encampment for their building projects, and had multiple camps, including two that spread over five acres each. They managed to create a pleasure palace, complete with baths and gardens, in the middle of the desert. Today we seem to have a good impression of how the Romans managed to build what appears to be the most massive attack ramp in the ancient world in a matter of weeks, instead of months.

We discover the bitterly ironic fact that the troops staring up at Masada for months had been forged and trained in the architecture of warfare by their earlier experiences in putting down the Zealots’ fellow rebels over the previous three years.

And above all, we learn from studying the remains of the Roman encampments and siege structures that such relentless pursuit of a monolithic building scheme — even at the expense of strict military necessity — suggests that the Romans were consciously adopting a form of psychological warfare.

The Jewish rebels inside their fortress high above the Roman encampment would have known that they were, finally, totally isolated, with no hope of relief or escape. Even more, other restless subject nations would readily understand the message that they could never resist Roman might.

Yet this sobering reflection on what the Jews of the first century faced is still only a fraction of what we’ve learned about Masada. There are still unexplored caves within the site, some of which are still to be explored in coming months.

Perhaps the most interesting thing about Masada is that it has taken the work not just of archaeologists but also of geologists, historians, and other scholars to piece together the full picture of an event that took place almost 2,000 years ago.

Mark 3:7-12 – Crowds Follow Jesus || Matthew 12:15, 16;[1] Luke 6:17-19 MK3:7 Now Jesus withdrew with his disciples to the seashore and a large crowd from Galilee and from Judea followed him. MK3:8 And because they had heard such great things about Jesus numerous people from Jerusalem, Idumaea, and from beyond the Jordan, and […]

Mark 3 – The Nazarene’s Commentary: Mark 3:1-6 – A Withered Hand Cured on the Sabbath

CHAPTER THREE: SABBATH GOODNESS, APOSTLES, AND RELATIVES [“He is Crazy”] Key word: Associations Mark 3:1-6 – A Withered Hand Cured on the Sabbath || Matthew 12:9-14;[1] Luke 6:6-11 MK3:1 Now Jesus entered the synagogue again and there was a man with a withered hand. MK3:2 Everyone was closely watching Jesus to see if he would […]

Review Questions on Chapter Two What display of faith impressed Jesus? What accusation did the Jews bring against Jesus? How did Jesus answer the question of fasting? What Bible story does Jesus relate in his defense of breaking the Sabbath? + Preceding Mark 2 – The Nazarene’s Commentary: Mark 2:1-12 – Jesus Preaching and Healing […]

Mark 2 – The Nazarene’s Commentary: Mark 2:13-17 – Accused of Associating With Sinners

CHAPTER TWO: A PARALYTIC HEALED, A TAXMAN CALLED, AND PHARISEES [“Calling Sinners”] Key word: Authority Mark 2:1-12 – Jesus Preaching and Healing at Home || Matthew 9:1-8;[1] Luke 5:17-26 MK2:1 Some days later Jesus entered into Capernaum again and soon everyone realized that he was at his own residence.[2] MK2:2 Soon many began to gather […]

Evangelical influence in the Jewish world

Jayson Casper has presents his view about Israel on his blog and looks at certain Messianic Jews and wonders how evangelicals should identify with the issues Israel faces. Jamie Cowen, an Israeli lawyer and a believer in Jesus says: “going through Messianic Jews is best.” This brings Casper to think the complexity of Israel divides […]

A Letter to the Ekklesia

Originally posted on Rose of Jericho Ministries:
With love from your Torah Observant Brothers and Sisters My dearest brothers and sisters in Christ, A mass exodus from man-made religions has been happening over the last few years, specifically since the fulfillment of the Revelation 12 prophecy in 2017, but much more frequently over the last…

Originally posted on Moshe’s Corner:
Abram was born in the city of Ur in early Babylon, His father sold idols. We find that Abram’s genealogy goes back to a man named Eber, a great-grandson of Noah. The designation of “Hebrew” refers to the fact that Abram descended from Eber and that he came from…

It is a well-known fact that there are not many Jews who have accepted that the Nazarene master-teacher Jeshua is the promised Messiah. Although the Messianic Jewish movement may not have been huge or well known until the 60s, there has been a faithful remnant keeping the torch lit from the time of Yeshua’s apostles […]