At the end of the 19th century the brothers William John (1847–1882), Arthur Thomas (1854–1938) and Frank George Jannaway (London 1859–1935) became interested in the thoughts of doctor John Thomas, who in the United States of America had founded a group of Christians who wanted to build their church like the first-century Christians.

Frank George Jannaway was born in Kensington, Brompton in 1859 as the seventh child and third son of William Jannaway (1814–86) and Caroline Amelia (née Wiltsheare) (1831-77).
He, like John Thomas had a keen interest in what happened with and what still would going to happen with God’s People.

In 1885, when F.G. Jannaway was 25, his older brother A.T. Jannaway, then 31, became involved in the first of a series of “controversies” which would mark, and hamper, the development of the Christadelphian movement in London. A.T. Jannaway strongly supported the position of Robert Roberts.

In succession of Thomas he also went preaching at several places. He gave regular public lectures at the South London Ecclesia first at Westminster, from 1882, and later at Islington and Clapham, where he proved to be a notable debater, not just on doctrinal subjects (e.g. 1894), but also, more unusually for Christadelphians, on the subject of Christian Socialism (1908, 1909). It is by his political action that Dr. Thomas could keep his followers away from the battlefields in the Confederate States. (An action which is often forgotten by lots of Christadelphians as well as by opposers of Christadelphianism.) 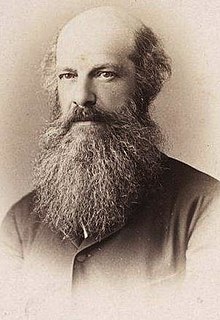 Frank Jannaway was interested in and felt sympathy for the South African-born British author, traveller, diplomat, British intelligence agent, Christian mystic, and Christian Zionist Laurence Oliphant. That controversial figure wanted to see the establishment of a Jewish state in Palestine, which according to Thomas and Jannaway would also be

“fulfilling prophecy and bringing on the end of the world”

Opponents of the member of parliament and Attorney General of the Cape Colony thought Oliphant to be motivated either by commercial interests or by a desire to strengthen Britain’s position in the Near East.

Robert Roberts also was not afraid to show some political interest and Roberts called on the Christadelphian community to support Laurence Oliphant‘s appeal for funds for the Rosh Pinna settlement at Al-Ja’una in Galilee. The 19th century Christadelphians put their hope in the return of the Jews to their promised land, as part of the fulfilment of the prophecies.

After his Verbatim report of debate on Socialism between Mr. F. G. Jannaway and Rev. N.E. Egerton-Swann. Monday, November 23, 1908, etc. (1st publ. 1908, 2nd ed. 1909) and the 1909 Ought Christians to be Socialists? Debate with the “red vicar” Rev. Conrad Noel on Jannaway’s “A Godless Socialism”, Jannaway presented two books which dealt with this: Palestine and the Jews (1914) and Palestine and the Powers (2nd Ed. 1918) which were summarized and referenced in an overtly Zionist appeal Palestine and the world (1907, 1922). 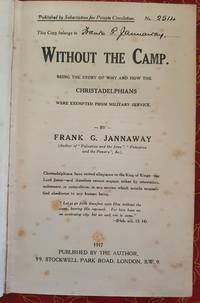 Jannaway was also notable for his role in the conscientious objector tribunals of World War I. His reaction to controversy was to separate from others in the name of purity, and he was instrumental in the formation of minority factions, such as the Berean Christadelphians. However, the reasoning in “Without The Camp. Being The Story Of Why And How The Christadelphians Were Exempted From Military Service, eventually caused him to separate even from his own brother, Arthur Jannaway.

In furtherance of his interest in prophecy brother Frank and his wife also travelled to Russia in 1903 and to the U.S.A. and Canada in 1914 on a speaking tour.

Concerning participating in the war, Jannaway found that when Christadelphians would work as stretcher-bearers for example, they still would be participating to war and as such doing an unchristian act.
In the first year England started sending people to the Belgian front Jannaway undertook the compilation of a register of all brethren likely to be affected by the draft, with the objective to keep the Christadelphian body entirely outside the Army. In doing so he succeeded in obtaining signatures from 154 Christadelphian ecclesiae across Britain, with the notable exception of Temperance Hall, which had already drafted, its own petition of 1,000 members, leaving open the issue of non-combatants, but hesitated to submit it to Parliament.

The founders of the Union of Democratic Control (UDC) saw the outbreak of the First World War as having resulted from largely secret international understandings which were not subject to democratic overview. The party did strongly oppose conscription and wartime censorship along with other restrictions on civil liberties. The pacifist Christian group that had arisen in mid-17th-century England, the Religious Society of Friends (Quakers) provided general backing and most of the funds for the Union came from wealthy Quakers. There were also close links between the Union and the supporters of women’s suffrage. The common idea of ​​abstaining from violence was also for the Christadelphians an attitude to take and to demand. 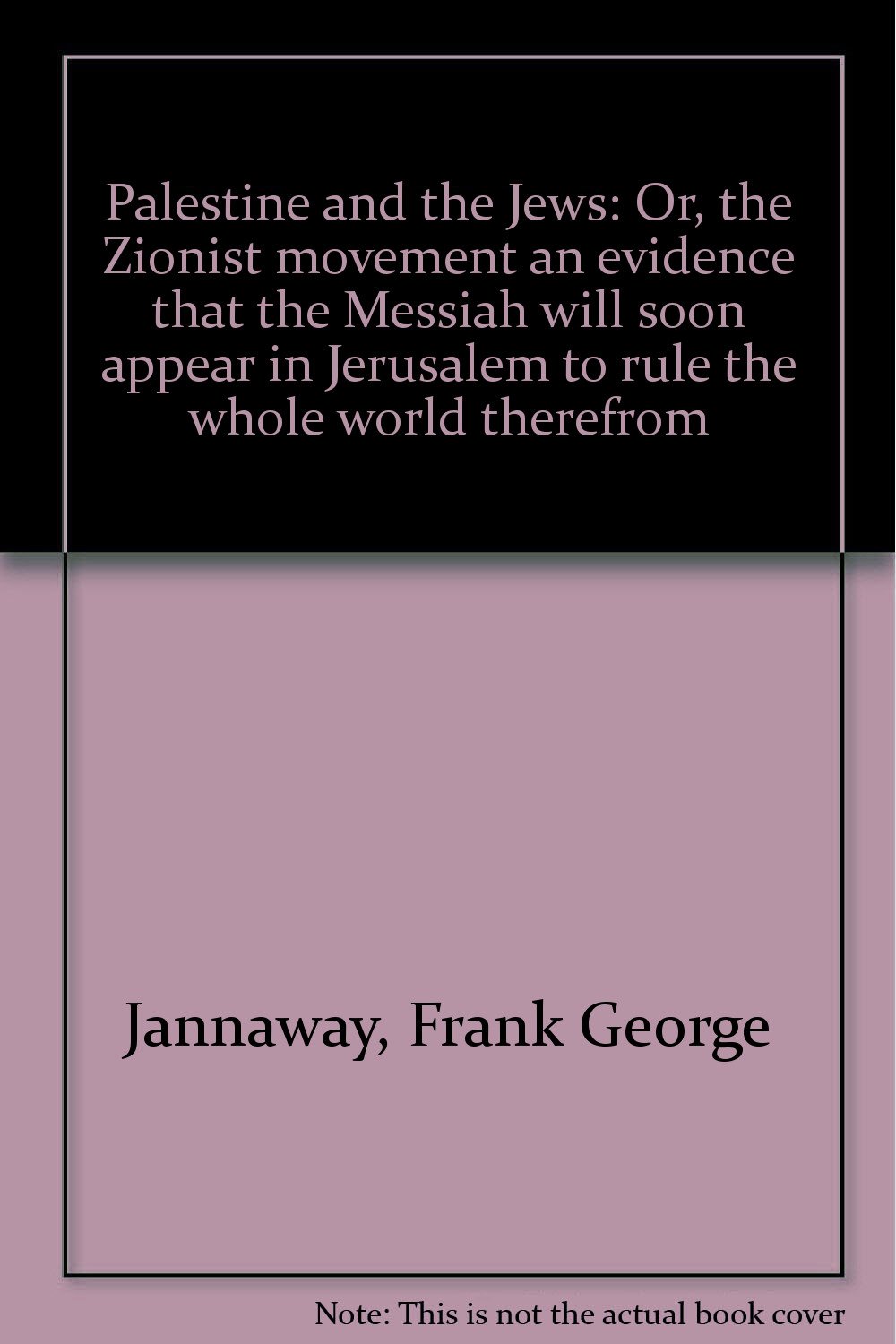 However the Birmingham brethren continued to have more flexible views than South London on the subject, leading to problems which were to extend beyond the war itself.

In our coming series on prophecy we shall present some of the writings of Frank Jannaway (F.G.J.) to answer some questions still posed today, or to give food for thought in present times.

Concerning some writers of our series on prophecy #1 Dr. John Thomas

Former Temperance Hall built in the late 1800s. – The entrance to the former fire station at 38 John Street, now part of the Camden Museum Library Complex.

In the period of our present time system (Gregorian Calendar), the world has done everything to change God. The majority of America’s churches teach that God is the same yesterday, today and forever. though when they would look at the person many take as their god and the God of the Bible, you would expect […]

Too many Christians think they do not have to listen to the Torah and do not have to keep to the commandments given by God in ancient times. – By undermining the authority of the Torah, Buzzard undermines his own position on the Jewishness of the Creed of Jesus. For the Jewishness of this creed is rooted in the Torah. Buzzard also undermines his own Kingdom theology. For Jesus’ expected a Kingdom as outlined by the prophets and ruled by the Torah.

Carving a friend out of stone

”“Like a sculptor, if necessary, carve a friend out of stone. Realize that your inner sight is blind and try to see a treasure in everyone.” ~ Rumi”

Looking at a non-typical 97-year-old survivor.

Making itself worthy of happiness

Originally posted on Dear Kitty. Some blog:
From the Globe and Mail in Canada: NATO’s potty rules shut out Afghans JOE FRIESEN KANDAHAR, AFGHANISTAN — Under a bizarre policy that echoes the days of segregation in the United States, Afghans who work at the NATO base at Kandahar Airfield must use separate toilets marked “local…

Iran’s water crisis stokes another round of protests

Originally posted on Democracy for Iran:
By Struan Stevenson July 26 (UPI) –?Prior to the 1979 revolution, Iran’s population of 34 million people relied on a stable water supply, sourced from millennia-old underground canals and aquifers. The Iranian revolution, hijacked by the mullahs, changed all that. The theocratic regime handed control of the nationalized water…